Last Thursday over 60 OpenID advocates met at Sears World Headquarters in Chicago for a full day of discussions on progress to date and future plans for OpenID deployment and utilization. There is a summary of the event on the OpenID Foundation wiki. See Twitter coverage of the event with the hash tag #openidux

Updates from the Identity Providers:
The session kicked off with presentations by Google (Joseph Smarr), Yahoo (Allen Tom), Microsoft (Angus Logan), Facebook (David Recordon), PayPal (Andrew Nash), and AOL (George Fletcher). Copies of many of the presentations are available on the OpenID Foundation wiki. Some key highlights from these sessions:

Some History and Recommendations:
After the updates from the Identity Providers, Brian Ellin, Product Manager at JanRain, chronicled the evolution of OpenID UX. Brian made a number of recommendations to RPs looking to drive adoption and usage of OpenID registration and login: 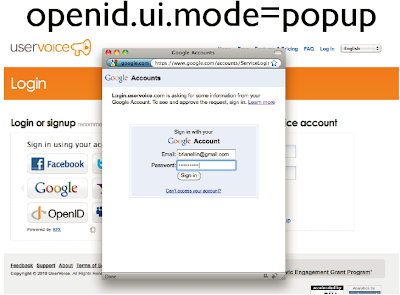 By implementing these recommendations, Blink182.com saw that 60% of users opted for 3rd party registration over the legacy username/password option. Through a finely tuned implementation that evolved through iterative testing, Universal Music Group’s Lady Gaga website was able to achieve an astounding 89% 3rd party login preference over the traditional username/password option.

“Voice of the Customer” – Input from Website Operators:
Next up were Daniel Jacobson from NPR, Rob Harles from Sears, and Jonathan Coffman from PBS representing the “voice of the customer.”

National Public Radio (NPR):
Daniel Jacobson, Director of Application Development at NPR, was recently elected to the Board of Directors of the OpenID Foundation and as the Chairman of the Adoption Committee. He reported on goals and priorities of the Adoption Committee for the upcoming year. Daniel’s vision behind these goals is to help position OpenID as a product that will make it easier for website operators to implement while providing a better user experience for the end users. The top priorities supporting this vision include:

Anyone willing to contribute to the discussion on how to increase adoption and usage of OpenID may want to subscribe to the Adoption Committee mailing list.

Daniel also described the research that NPR has been doing with OpenID and that their “end game” is shared identities across all public media. They are currently collaborating with PBS and the OpenID Foundation to determine the next steps in their identity sharing strategy.

Sears:
Rob Harles, VP Social Media and Community at Sears Holdings Company, presented a summary of Sears recent deployment on the MySears and MyKmart communities as well as their plans to roll out across all the Sears websites. Rob was recently elected to the Board of Directors of the OpenID Foundation and serves as the Chairman of the Online Retailer Committee.

Rob reported that Sears has one of the fastest growing retail communities, with 400% growth in 2009. They deployed JanRain‘s RPX integrated into the Viewpoints community platform to accept third party registration and login from Yahoo, Google, Facebook, MySpace, AOL, Twitter, Windows LiveID, and general OpenID accounts.

Additionally they surveyed their members to find out what drives interest in 3rd party login. The top two motivators were login convenience and the desire to not have to set up yet another username & password for a new account. When asked what would further improve user experience, the top two requests were the ability to share content and photos with friends.

Rob described their objectives as a combination of serving their existing customers better while also reaching out to a broader demographic than their traditional 35 to 53 year old female segment. He said that accepting registrations from a wide variety of identity providers definitely helped to expand their demographic reach.

Public Broadcasting Service (PBS):
Jonathan Coffman, Social Media Strategist and Product Manager at PBS, was also recently elected to the Board of Directors of the OpenID Foundation and serves on the Adoption Committee. PBS has launched an OpenID service for use across PBS websites.
Next steps for PBS include:

Best Practices and Data Management:
Finally, Allen Tom reviewed some best practices including account recovery/reset, attaching multiple identifiers, mobile authentication, and using WebFinger. Joseph Smarr discussed data management including updates on SREG, AX, OAuth, WRAP, Portable Contacts, and Activity Streams. Joseph acknowledged that there are a lot of moving parts and that things are changing quickly, so organizations who don’t have sufficient internal resources or expertise might want to consider outsourcing to a solution provider.

What was especially memorable for this event was the active involvement, questions, and recommendations from existing and prospective OPs. Representatives from Sears, NPR, PBS, AARP, MTV, Fox News, Universal Music Group, Kodak, Tribune Interactive, White Pages, Scout24/Deutsche Telecom, and GameStop provided lots of constructive feedback for the OpenID Foundation and the Identity Providers.

Thanks to the Sponsors:
Many thanks to Sears for hosting the event, Google for providing video conference access from DC and Mt. View, and to all the participants who braved the Chicago weather and airport challenges to attend this exceptional event.

Account Chooser adoption board election board elections Certification CIBA connect developers Don Thibeau election Errata events FAPI federation Final Specification Financial-grade API Foundation google government guest blog HEART Identity Assurance iGov Implementer's Draft MODRNA OBIE oidf OIDF workshop open banking openid OpenID Connect OpenYOLO Public Review retail advisory committee RISC security spec specification summit usability user experience vote women in identity Working Group workshop
This website uses cookies to allow us to provide you the best experience while visiting our website. By continuing to use the site, you are agreeing to our use of cookies.
You can change your cookie settings at any time but if you do, you may lose some functionality. More information may be found in our Privacy Policy.Confirm